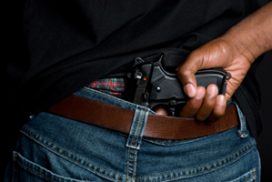 At the Sentencing Hearing, the U.S Probation Office contended that one of the firearms was stolen, therefore, the Probation Offense argued for a two-level enhancement.  In addition, the defendant had a criminal history of III, which means that he had at least two prior felony convictions on his record.  The court agreed with the enhancement and sentenced the defendant to 84 months.